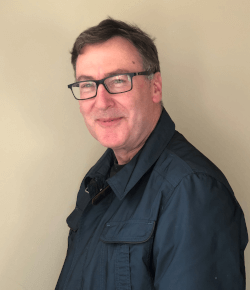 by Natalie Verdon
in Meet
Comments

Eckhard Kemmerer looks for the opportunities to disrupt that others shy away from. Inflicted with curiosity that some say could fell the hardiest cat and their legion of cat home friends, Eckhard looks for the pointy end of the problem to solve. In previous incarnations, Eck has worked with household names in the FMCG sector, orchestras and performance troupes, and even braved the Australian funeral industry.

What Eckhard Kemmerer brings to any project is a mind that can layer information, sort through the cracks and uncover the difference. He plays in the margins and grabs hold of the point end of any problem. Like a kid that has figured eating the vegetables first minimises the pain, Eck looks to tackle the largest challenge first to carve a path to victory.

Why is liveability important?

Living in a city such as Sydney and regularly travelling overseas to major metropolitan centres, Eckhard has seen his fair share of city snarls. Eckhard sees liveable cities as a marriage or crush between two sides of our relationship with urban centres.

“Our cities and urban centres increase in size as the population swells and grows. On the positive side of that growth, you have more leisure activities and choice. You have more working opportunities for people. You have growth in education. On the negative side, you have growth as well. Traffic congestion grows, so too does the stress and ill-health it brings with it. Crime increases. Our health suffers through disease, stress, environmental factors and more. Liveability emerges as the balance between to the negative and positive. Getting the balance between to the right means obtaining liveability,” he enthused.

It’s here that you gain the first insight into the way Eckhard thinks. It’s not about eradication. It isn’t about ignoring problems or papering over them. It’s about true conservation of the living and human environment; where the careful management of resources occurs to create liveability through balance and understanding.

Eckhard Kemmerer is the co-founder of Briometrix, a startup that has designed a dedicated wheelchair fitness app and tracker with navigation capabilities. Eckhard is one of the many Australians that comes to understand disability on an intimate level Parkinson’s Disease.

Ever the ideas man, Eckhard is applying his knowledge of product and sales to solution-orientated focus on technology.

Three things immediately strike you about Eckhard has he plumbs the depth of disability and its relationship with technology.

Where some see piloting a wheelchair better through the streets helping people in wheelchairs, Eckhard sees it helping mothers with prams, families with small children, the elderly with walkers and canes, the school teacher moving the class through the city, the cyclist, the jogger, the sprained ankle, the high heel and so on down the line.

His own work with Briometrix opened his eyes to the connection between urban planning, accessibility, liveability and technology.

“I have been working on an innovative technology for people who pilot wheelchairs.  It was a surprise to find that our first paying customers turned out to be urban planners.  I think it is because our technology makes accessibility visible.  You can see the effect of the urban landscape, you can see where people come, stay and go.  Now that we have made accessibility visible it has the power to influence,” he explained.

If you’re not welcome, what’s the point?

Many cities pride themselves on liveability through having parks, gardens, festivals and public events. Yet how many cities can truly say the oasis of gardens and parklands and/or the wonderful offerings on the calendar are reducing stress, encouraging health and bringing community together if people with disabilities can’t access them?

In research conducted by Briometrix, Eckhard found that 4 out of 5 people with wheelchairs don’t go to new places, try new venues, check out the festival circuits or take in these public wonders. The main reason? Trying somewhere new means not knowing if it is accessible or not. The information may be lacking, out of date or not even available in the first place.

This is something Eckhard wants to change. Especially seeing he loves being places for the first time as his favourite activity.

Opening up the city and giving people the ability to move without worrying about access, capability and glitches along the road is something Eckhard is heavily invested in.

“Accessibility is not an either/or equation- you don’t lose the ability to attract able-bodied people to live, work or play if you make a place accessible to people with disabilities to do the same. This is an opportunity for cities, councils, builders and citizens to come together and do better. Let’s widen the appeal, bring in excluded and new audiences, and get more people involved in our cities in a positive way. If you aim to make streets accessible for people in wheelchairs, the benefits are felt across society. The visibility of accessibility breeds confidence in the health of a city. It helps people feel welcome, safe and included,” shared Eckhard.

Not only is the idea of inclusive cities heartening to the citizens themselves, such inclusion could mean a slice of a $12 billion accessible tourism market for Sydney. It could mean jobs, new creative ideas and revitalisation for streets and venues alike.

Taking the accessibility equation by the horns is a challenge Eckhard relishes.

“To me, the places that say, ‘you can’t go here’ are an invitation to try and explore.”

Sorry, the comment form is closed at this time.